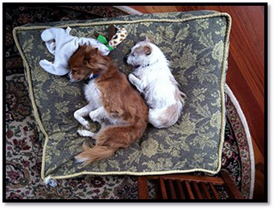 My last blog post included a bit of ranting about puppy mills and the importance of purchasing puppies responsibly. While it’s unusual for me to rant two weeks in a row I simply can’t resist given what I just viewed in the September 8-15 edition of Time magazine.

The Time cover states, “The Answers Issue: Everything You Never Knew You Needed to Know.” When I initially glanced at the centerfold’s jazzy appearing infographic titled, “Where Do Designer Dogs Come From?” I winced and my heart raced a bit. Uh oh, would this feature enhance public interest in the “designer hybrids”? Or maybe, just maybe (my hope knows no bounds), the piece would point a disapproving finger at breeders who have jumped on the designer dog bandwagon hoping to cash in on this misguided fad.

My hopes were quickly dashed. The Time piece was seemingly all about enticing the puppy-purchasing public to shell out $2,000 plus for intentionally bred mutts. There’s abundant appeal in the 45 whimsical designer names presented in the article, such as Sharmation (Shar Pei/Dalmatian mix), Schnoodle (Schnauzer/Poodle mix), and Pugalier (Pug/Cavalier King Charles Spaniel mix). A list of popular celebrities and their chosen designer dogs was included. Additionally, the infographic suggested that designer dogs sustain better health than their purebred parents. Good luck finding a veterinarian who agrees with this sentiment.

If I were in charge
How I wish I’d been sitting around the editorial table at Time magazine when the designer dog feature was conceived. I would have encouraged running the piece, but with a whole different bent. Readers would have learned that mixed breed dogs (aka, designer dogs) do make wonderful pets, and that they are readily available for adoption from animal shelters, humane societies, and rescue organizations. Getting a puppy from these sources not only saves a life, the adopter will spend a fraction of the amount required to purchase a designer dog from a private breeder or puppy mill proprietor.

While the exact “design” of a pup adopted from a shelter or rescue organization may not be known, the not knowing always makes for some great conversation. For those with a need to know, simple and relatively inexpensive DNA testing will shed some light on a mutt’s pedigree.

My Time piece on designer dogs would talk about the mindset of reputable/responsible breeders. They do not produce mixed breed dogs. Rather, they focus their time and energy perpetuating the best traits and eliminating the undesirable ones of the breed they love so dearly. Such breeders believe that “designer hybrids” detract from, rather than enhance the breed they fancy.
Time magazine readers would learn that Wally Conron, the original “inventor” of the designer dog, regrets the day he created his first Labradoodle back in the 1980’s. He did so with hopes of accommodating the needs of a married couple. The Lab portion of the mix was intended to assist the wife who had vision problems, while the Poodle portion would deter the husband’s allergies. Mr. Camron has since stated,


I’ve done a lot of damage. I’ve created a lot of problems. Instead of breeding out the problems, they’re breeding them in. For every perfect one, you’re going to find a lot of crazy ones. You can’t walk down the street without seeing a Poodle cross of some sort. I just heard about someone who wanted to cross a Poodle with a Rottweiler. How could anyone do that? Not in my wildest dream did I imagine all of this would happen.


In my article I would share photos of my own designer dogs (how cool would that be in Timemagazine!), Nellie might just be a Cairnrussell (Cairn Terrier/Jack Russell Terrier mix), and Quinncould be a Borderpap (Border Collie/Papillon mix). Ask me next week and I will have changed my mind about who their parents may have been!

Lastly, I would encourage Time readers to recognize the difference between purchasing an inanimate designer item such as a purse versus a living, breathing creature. The less expensive, fully functional non-designer handbag that wasn’t purchased was not in dire need of a home. Not the case for the less expensive, adorable, shelter or rescue puppy that was not adopted.

How do you feel about purposefully bred designer dogs?