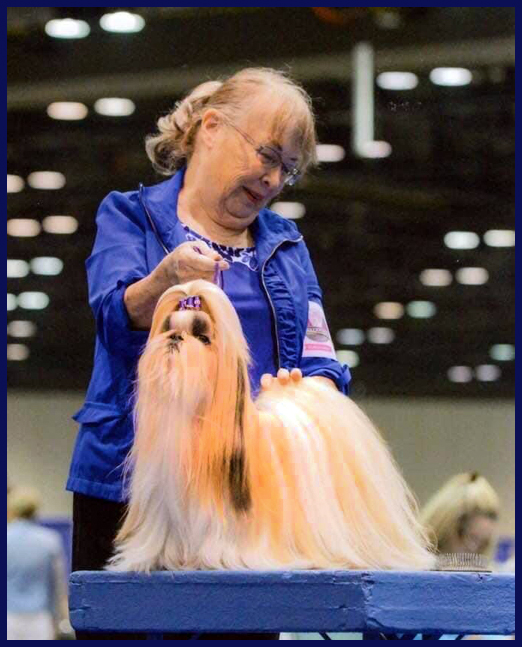 The American Shih Tzu Club Board of Directors is pleased to award Jo Ann White the AKC Outstanding Sportsmanship Award. Her devotion and service to our breed and the whole dog fancy began over fifty years ago. She was actively exhibiting her first Shih Tzu Tien and Nushi in matches during the later 1960's before Shih Tzu were officially able to compete in AKC shows.
From her early days breeding and showing in the northeastern US to her move with her husband Dick to the western coast of Florida, Jo Ann lived with a limited number of Shih Tzu in their home. Many of these dogs attained their championships. Most notable among these dogs is Jo Ann's "heart dog", GCH Krissy's Tybee Dream Machine ROM , her beloved "Chico".

Jo Ann has been active in not only Shih Tzu clubs but also all breed clubs throughout the years. Her membership in the American Shih Tzu Club began in 1973, making her the longest active member of our club. Her involvement has taken many forms. She has served on the board of directors for many years, including serving as president during 1995. For many years she's written our breed column for the AKC Gazette. She's chaired various club committees and presently serves as the web site coordinator. Jo Ann also has been coordinating our booth at Meet The Breeds during Westminster week. One of her more daunting tasks was as show chairman of the 2019 national specialty held in Fort Lauderdale.

Along the way, Jo Ann was honored with a life membership in the American Shih Tzu Club.

Jo Ann is currently a member of, not only ASTC, but also the Shih Tzu Club of Central Florida and the Manatee, Florida all-breed club. During her early days she was active in the Shih Tzu Fanciers of Greater New York.

Last, but not least, Jo Ann made a lasting contribution to our breed in writing what many regard as the definitive book on the Shih Tzu breed, The Official Book of The Shih Tzu.

Never one to with the spotlight, Jo Ann can be counted on to take on a task and thoroughly complete it. She can be counted on to help and sound advice. Despite current health limitations, Jo Ann is still very active on the board of directors, web site, and specialty committees.

Jo Ann is the epitome of which every canine enthusiast should strive to be.