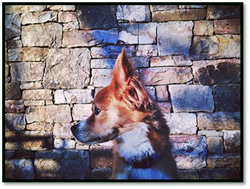 Testing dogs annually for heartworm disease is not a new recommendation. What is new is the type of testing being recommended. Until recently, performing a simple blood test to screen for the presence of heartworm antigen was the test of choice. We now know that antigen testing produces ever-increasing numbers of false negative results (the test result is negative even though the dog has heartworm disease). A study in the March, 2014 edition of Veterinary Parasitology documented that, amongst a population of shelter dogs in the southeastern United States, 7.1 percent had false negative heartworm antigen test results.

The Companion Animal Parasite Council (CAPC) and the American Heartworm Society (AHS) recently revised their recommendations regarding annual heartworm testing. They now recommend that microfilaria testing along with antigen testing be performed. Combined, these two tests reduce the possibility of missing a heartworm-positive dog.

Antigen testing
Heartworm antigen testing detects protein particles within the reproductive tract of adult female heartworms. Here are some reasons why a dog with heartworm disease could have a negative antigen test:

Treating heartworm disease with heartworm preventive medication is referred to as the “slow kill” method. Doing so became popular when melarsomine, the preferred drug for treatment of heartworm infection, was in short supply. The slow kill method has remained popular because it is less expensive than the melarsomine protocol.

Parasitologists believe that dogs treated via the slow kill method may form immune complexes in which antibodies (the body’s immune system foot soldiers) bind with the antigens, thereby preventing them from being detected by heartworm antigen testing.

Microfilaria testing
Microfilariae are immature (baby) heartworms that circulate within the bloodstream. Mosquitoes consume them during a blood meal, so microfilariae are considered to be the “contagious stage” of heartworm disease. Microfilariae are also the developmental stage that has the ability to develop resistance to commonly used heartworm prevention medications.

Current recommendations
While neither the heartworm antigen nor microfilaria tests are perfect, using the two in combination is currently thought to be the most reliable way to screen dogs for heartworm disease. Both are simple to perform, and all that is required is a small blood sample.

Annual heartworm screening is recommended for all dogs, even those receiving preventive medication. Lapses in administering the medication as scheduled and the existence of resistant heartworms are the basis for this recommendation.

Is your dog tested annually for heartworm disease? If so, do you know if your veterinarian is using the antigen test, the microfilaria test, or both?