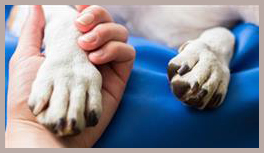 Just like human feet, dogs' paws have a lot of jobs to do. And since our furry pals aren't really into footwear and tend not to worry about what they're stepping in or on, their paws and nails can take quite a beating. This is especially true for working and hunting dogs, as well as canine athletes.

Fortunately, canine feet are tough and durable, so minor paw and nail problems tend to heal quickly on their own. However, many dog parents don't realize there are a number of canine disorders and diseases that seem unconnected to their pet's paws and nails, but that can have a significant effect on them, including the following conditions.

5 Disorders That Can Damage Your Dog's Paws