Team Shih Tzu, Doing Their Thing During the Pandemic 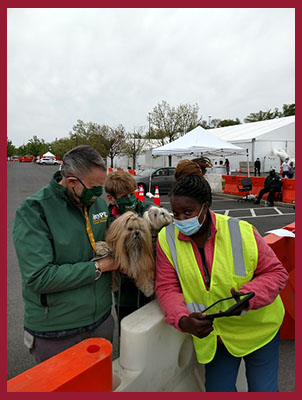 Reflecting back on our inability to share our guys with the community, during these recent, difficult times, at least not in our regular visiting capacities, we figured it would be just a matter of time before we would be called upon. 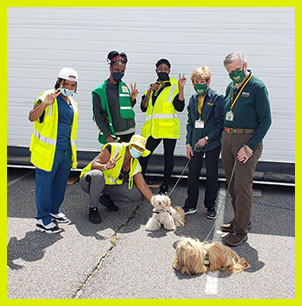 It was such an indirect connection, that brought us to one of our state mass vaccination centers, where they knew that we were the “dog people”, and requested they come out of the car and visit with the staff and volunteers. The next morning we got a call from FEMA, informing us that gotten special permission, and wanted us, and/or our other teams, at their mass vax center every day, to welcome those coming to be vaccinated, while they were waiting the fifteen minutes after their shot, anywhere other than where the shot were actually given. 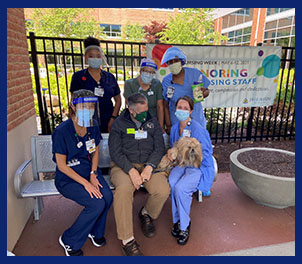 Since this was a very special arrangement, of course word spread to the other mass vax centers in the Washington, D.C. metropolitan area. We arranged for other HOPE AACR teams to come in from our Eastern U.S. region, “Team ShihTzu” was in demand and made appearances at several of the centers.

During one visit, the National Guard had asked for a favor, to give a special “gift” to their hard-working staff, so we arranged to buy for them, a large quantity of pizzas. When we arrived to make sure everything was in order, Shellie and I ended up handing out seven hundred pieces of pizza, while our guys said “hello” from their crates, right outside the door.

The crowds at these locations were incredible. And constantly rotating in and out. We visited with hundreds of people every day. It was incredible. Just another “adventure” for our guys. Of course, they thrive on the attention!

What a great breed!

Credit: Burton and Shellie Goldstein, with the Bear and Emma, aka “Team ShihTzu”