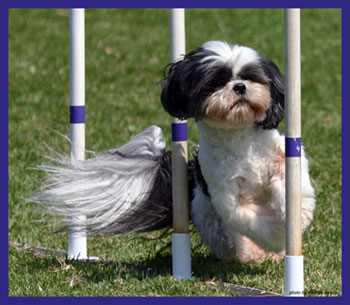 "Niki” an eleven year old Shih-Tzu owned by Ed and Linda Harper of El Cajon, California became the first Shih-Tzu to earn her AKC MACH (Master Agility Champion) 12 on Sunday, March 13, 2009. Niki was also the first Shih-Tzu ever to obtain a MACH. One of the amazing facts about Niki is that she did not begin agility training with her owners until she was five years old. She soon proved herself to be a natural, running fast and clean, and racking up title after title. For the last five years Niki has been the Number 1 Shih-Tzu in Agility. This has started out to be a great year for Niki who also became the first Shih-Tzu in recent history to earn a TD tracking title. And on February 22, 2009, Niki also became the first Shih-Tzu to earn a VCD1 (versatility Companion Dog). This is achieved when a dog has competed in Obedience, Agility and Tracking events and has earned a title in each area! Way to go, Niki. Congratulations to Niki and her owners! Niki--you have set the bar–and rarely knock one down–may you continue to raise the standards even at 85 years old (in human years!).