The Shih Tzu’s Purpose: To Please People for a Thousand Years 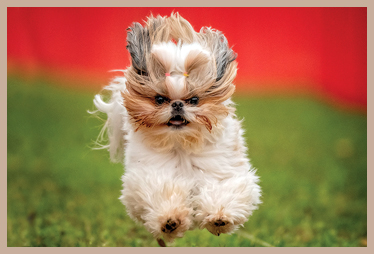 It’s Sunday, shortly after daybreak. Nestled into their plush pillows, 9-year-old Shih Tzu littermates Emma and Bear begin their slow-stretch paw and neck routine, although it’s clear these 9- and 12-pound bundles of fluff would prefer to catch more Z’s.

Shih Tzu (pronounced sheed-zoo or sheet-su) descend from centuries-old Chinese ancestry and enjoyed life as royal lap warmers. Lounging lies deep in the breed’s DNA, but wide-eyed Emma and Bear are no slackers. Once the phone rings, their owners, Burton and Shellie Goldstein, of Gaithersburg, Maryland, pack a bag, and Team Shih Tzu is on the move.

The Goldsteins and their sweet-faced dogs deploy to the Washington Navy Yard in southeast Washington, D.C. Hours earlier, a gunman killed 12 people. Ready to take comforting others up a notch, these affectionate Toy Group members console first responders and frightened employees who skirted death by hiding under their desks for half the day.

With guidance from mental health professionals, Emma and Bear are certified for animal-assisted crisis-response work with HOPE Animal-Assisted Crisis Response, in Eugene, Oregon. The organization has strict requirements.

“The dogs must receive certification through a pet-therapy program, undergo a screening process, attend a three-day workshop, and take continuing education training with FEMA [Federal Emergency Management Agency],” says Karen Hathaway, president of HOPE. “Helping people in crisis who are dealing with overwhelming grief, fear, and confusion goes beyond what therapy dogs do when they visit hospital patients. Not every dog can handle it.” 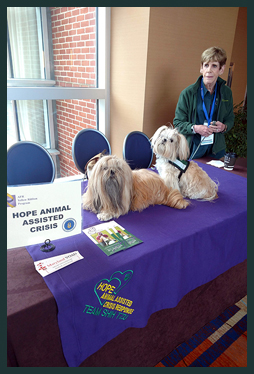 Shih Tzu Emma, a silver and white, and Bear, who is gold with a black mask, are no strangers to disaster sites. They’ve eased pain at school shootings and helped soften hearts during the floods in West Virginia; Ellicott City, Maryland; and Toms River, New Jersey. With flaming torches as a backdrop, they calmed responders at the first anniversary of the Unite the Right white supremacist rally in Charlottesville, Virginia, and months later brought hope to homeowners after a series of hurricanes hit along the Texas coast.

“Onlookers at disasters approach us and say, ‘We understand you have dogs. Can we pet them?’ ” Shellie Goldstein says. “After one woman learned the flood had taken her home, she asked to hold Emma and broke down.”

The Goldsteins carry Emma and Bear into the call center and down the row of headset-wearing staffers who vigilantly watch their computer monitors.

“If a dispatcher is on the phone but looks our way and reaches to touch the dogs, we’ll place one on their lap,” Goldstein says. “Often responders will sit on the floor with both dogs and run their fingers through the dogs’ cottony coats. For a few minutes, you can see the muscles in the dispatchers’ face relax.”

That Emma and Bear maintain their calm demeanor amid the chaos and unpredictability of crisis scenes speaks volumes about the breed’s stable nature.

“We were in West Virginia during the flood, and emergency personnel around us airlifted victims on helicopters, moved people in speedboats, and blared the sirens on fire trucks,” Burton Goldstein recalls. “The dogs never flinched, and looked at us as if to say, ‘Where are the people?’ ”

To make sure the dogs can stay calm despite the cacophony of revved-up boat engines, whirling helicopter blades, and rumbling trucks, the Goldsteins take their duvet duo all over the country for continuing education trips with FEMA.

They are not just one-trick puppies. In the times between their frequent deployments, these sturdy, lively, and alert dogs compete in advanced obedience, rally, scent work, and agility. 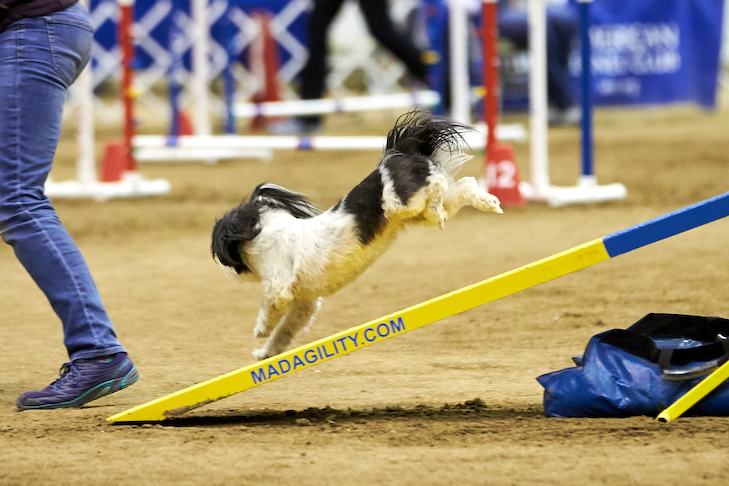 Playing to the Crowd

Considering their delicate appearance and small size, Shih Tzu are surprisingly compact and solid. Pretty and perky with oodles of style, it’s no surprise that Shih Tzu rank 20th in AKC breed popularity.

Why are people so smitten with these Chinese charmers?

According to Jo Ann White, longtime Shih Tzu breeder and the author of The Official Book of the Shih Tzu, Shih Tzu are big dogs in little packages who love everyone they meet.

“They entertain themselves, are easy to live with, and get along well with other dogs and children,” says White, of Bradenton, Florida. “Shih Tzu make great pets and thrive on attention and applause.”

White recalls competing with one of her dogs in obedience. The dog left the ring to greet someone and failed.

At her next show, she completed a perfect routine after a spectator clapped for her.

“These dogs are little hams who want acknowledgment,” White says. 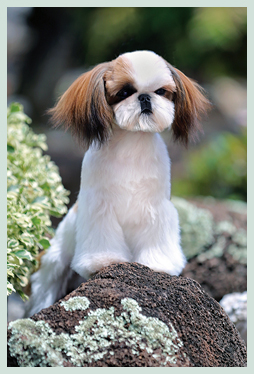 The Shih Tzu’s desire for recognition bridged a gap for Stacey Mays, who has cerebral palsy and uses a wheelchair.

“Going out in public meant people would either look the other way when they saw us coming or ask what was wrong with my daughter,” recalls her mother, Rhea Mays, of Chenoa, Illinois.

After a member of the American Shih Tzu Club gave Mays a 6-month-old Shih Tzu puppy, the dynamic of the conversations changed for the better.

“We took Miss Sarah with us on outings, and strangers would stop and ask to pet our puppy, who was pretty and loved the attention,” Mays says. “Miss Sarah helped make Stacey the focus, rather than her disability.”

Stacey and Miss Sarah spent summers at Camp Easterseals, and Mays remembers one boy in particular.

“He wasn’t responsive to anyone, but when Miss Sarah gave him her just-pet-me-I’m-not-judging-you attitude, he said, ‘I love you, Miss Sarah,’ ” Mays says. “It was a magical breakthrough.”

All are certified by the Alliance of Therapy Dogs, a nonprofit organization.

“Three to four days a week, I take a different dog to read with children, visit students at the University of Illinois during finals week, and sit with patients at a cancer center,” Mays says. “They’re happiest when they’re with people, preferably parked in a lap or curled up next to you. I have six boxes of bows, and I use them all.”

Far from frivolous, the little ponytail wrapped in a colorful bow on top of the dog’s head serves a purpose. Besides creating an impressive and adorable look, the top knot keeps hair out of the Shih Tzu’s eyes.

To tie the perfect top knot, follow these steps: 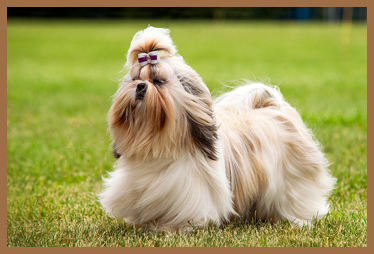 What’s in a Name? The name Shih Tzu means “lion dog” or “little lion.” It originated in Buddhism, where the lion represented a holy creature.

The Chinese called the Shih Tzu “the chrysanthemum-faced dog.” Resembling petals surrounding a flower, the dog’s hair grows around its round face in all directions.

One or More: The name Shih Tzu is both singular and plural.

Origin: Brought to the Chinese palace from Tibet, the breed descends from two other Chinese/Tibetan breeds—the Lhasa Apso and the Pekingese.

Colors: All colors are found in the breed, and no color is rare.

“To maintain the full coat, use a slicker brush to remove tangles and dead hair,” says Alex Rolon, a Shih Tzu breeder and grooming shop owner in Davenport, Florida.

The coat can be clipped into a short trim.

Historians believe the breed is a direct descendant of the Lhasa Apso. Given as wedding gifts for a safe 10-month passage from Tibet to China, Tibetans believed Shih Tzu possessed the souls of monks who fell from grace.

Shih Tzu lived with royalty throughout the Ming Dynasty (1368 to 1644 ad), but by the 19th century Pugs became more popular. The Dowager Empress Cixi kept a kennel of Pugs and Pekingese. The Dalai Lama gave her dogs similar to the Shih Tzu and she developed a breeding program devoted to the Shih Tzu’s unique characteristics. When she died, random breeding produced the Pug, the Pekingese, and the Shih Tzu.