I Can’t Believe He Ate That! 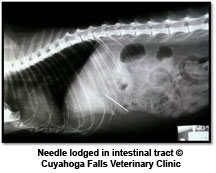 Dogs and cats eat some pretty darned crazy things! Sure, I can understand nabbing a loaf of bread from the kitchen counter or sneaking some “kitty roca” out of the litter box. But why on earth eat a pair of panty hose, a sewing needle, Lego pieces, or mama’s favorite diamond earrings? Just when I think I’ve seen it all, something new surprises me. Dogs, more so than cats, tend to be “repeat offenders.” I recall one Labrador in particular who had six surgeries over the course of his lifetime to remove socks lodged within his intestinal tract (in spite of counseling his humans repeatedly on picking up their socks). As many surgeries as this dog had, we should have installed an abdominal zipper!

Not all cases of foreign body ingestion have such happy endings, particularly if the foreign object has perforated through the wall of the stomach or intestinal loop. This allows leakage of nonsterile gastrointestinal contents into the normally sterile abdominal cavity resulting in widespread inflammation known as peritonitis. With emergency surgery and post-operative intensive care, many of these patients survive, but it is certainly becomes a big deal, both for the patient and the pocketbook.

Esophageal foreign bodies are notoriously difficult to remove, particularly if they’ve been lodged for more than a day or two. (The esophagus is the muscular tube that transports food and liquids from the mouth down into the stomach.) Even if the foreign object is successfully removed, the resulting inflammation within the esophagus can result in the formation of a stricture (narrowing of the esophageal lumen) and chronic, severe swallowing difficulties.

Some dogs and cats are lucky. The foreign objects they eat pass freely without any ill effects. I see the not so lucky ones with objects that have become lodged within their gastrointestinal tracts. There are two means to retrieve a gastrointestinal foreign body, surgery and endoscopy. An endoscope is a long telescope device that can be passed through the oral cavity, down the esophagus and into the stomach and upper portion of the small intestine. The endoscope allows visualization of the inside lining of the bowel and its contents. A grabber type instrument can be deployed through a channel in the endoscope to grab the object and then pull it out through the mouth. Endoscopy requires general anesthesia, but it is often preferred over surgery because of its less invasive nature.

In order for endoscopy to be of benefit, the foreign body must be located within the esophagus, stomach, or the very upper part of the small intestine (this is as far as the endoscope can reach). Some objects (coins, needles, tennis ball fragments, cloth) are well suited to being removed endoscopically because they are more “grabbable.” Objects that have traveled further down the gastrointestinal tract (beyond reach of the endoscope) or are without “grabbable” surfaces (large rounded bones, balls) are better retrieved surgically.

What can you do to prevent your dog or cat from eating inappropriate things? First and foremost, “baby proof” your home and yard for your pet. Anything unsafe that your little snookums might want to “mouth” should be put away and out of reach. This is particularly important when caring for a puppy or kitten. Secondly, it pays to know your pet- some cats and dogs never grow out of the habit of putting strange things in their mouths. Some adult cats continue to graze on dental floss found in the bathroom garbage pail, and some adult dogs continue to scarf down panty hose and underwear. If you provide chew toys or bones to your dog, supervise carefully to be sure that he’s a nibbler rather than a “swallow it whole” kind of guy. The best defense against gastrointestinal foreign bodies is avoidance of the things your pet might be willing to swallow. In some extreme cases, I’ve encouraged folks to muzzle their dogs when outdoors unsupervised or on walks, so they can relax knowing that their dog cannot gobble something down in the blink of an eye.

Perhaps my most memorable foreign body retrieval was performed on an adult Saint Bernard. X-rays suggested something was lodged in her stomach, but I couldn’t be clear exactly what the foreign material was. I passed my endoscope down into the stomach and saw an intact hand. I thought, “Oh my goodness!” I looked around a bit more and spotted a foot, and then what looked like some human hair. My heart was racing until I finally removed what I could identify as the chewed up remains of a troll doll! Afterwards I chuckled remembering that the view I get through the endoscope is magnified significantly!

What crazy thing has your dog or cat eaten in the past? Did it pass on its own or was it necessary for your vet to come to the rescue?