Heartworm: A real and present danger 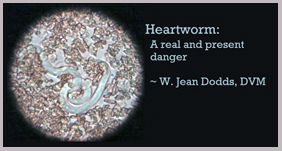 As a practicing veterinarian for over 50 years, I have witnessed the spread of heartworm disease and experienced dogs and cats who have succumbed to its harsh and unforgiving effects. I believe that the excellent public awareness campaign over the past 30 years about heartworm prevention and medication distribution have done great good, but have actually led pet caregivers to a false sense of security that their pets will not get heartworm and subsequently a backlash to prescription preventatives.

The reality is heartworm disease has not been eradicated but has actually mutated. If you have not heard of any cases recently in your area, speak to your local shelter or rescue about how real and present the danger is. These organizations are dealing with it on the frontlines because of lack of funding to give preventives or to test for the disease.

History of Heartworm Disease and Prevention

The 1970’s saw heartworm disease spread from the Southeastern portion of the United States to the rest of the Continental United States, Hawaii and Canada. During the 1980’s and 1990’s, ivermectin (Heartgard) and milbemycin oxide (Interceptor) for dogs were introduced to the market, respectively. These preventatives – which have been through clinical trials – have kept this disease from reaching epidemic proportions. I understand the angst surrounding recent controversy regarding some preventatives. Please remember that pharmaceutical companies have years of respected reputation behind them with shareholders expecting them to be responsible. With that being said, everything we put in or on our bodies and our companion animal bodies can produce positive and negative effects from medications to food to water to topicals. Clinical trials allow us to measure the degree of the positive effects versus the negative. The negative effects are highly scrutinized. Before a drug is released, the negative effects are more than likely proportionately low compared to the positive. This is not a statement that all heartworm preventatives work for all companion animals or that a level of caution should not be exercised particularly for pets with autoimmune diseases.

Heartworm Disease Cause, Spread and Effects

Heartworm Disease is indirectly spread between animals via mosquitoes. A mosquito bites a “host” animal. Within 14 days, the microflaria molts in the mosquito who then passes it through another bite to another animal. Once the larvae reach the immature L5 stage in the animal, they will arrive in the heart’s right ventricle and neighboring blood vessels. The artery lining is damaged. The animal’s bodily response is inflammation of the artery, called endarteritis, and other inflammation in the area to try to heal the damage. Blood clots, aneurysms, and complete blockage of small blood vessels can occur. The blood tries to find a way to get to around the wormed areas, which results in complete and partial blockage of blood vessels, causing fluid to accumulate around these blood vessels in the lungs and reducing the effectiveness of the lungs’ ability to oxygenate the blood.

Heartworm antigen tests and other tests have improved greatly over the past several years to detect the presence of heartworm earlier. However, it usually is 5-7 months before heartworm is detected after a dog is bitten.

Heartworm disease is directly related to how many worms are living inside the dog, the length of infection, the activity level of the dog, and the dog’s bodily response to heartworms. Oddly, highly active dogs will more than likely have a heavier burden of heartworms than less active dogs.

There are four classes (i.e. stages) of heartworm disease. The higher the class, the worse the disease and the more obvious the symptoms.

Class 1: No symptoms or mild symptoms such as an occasional cough.

Class 2: Mild to moderate symptoms such as an occasional cough and tiredness after moderate activity.

Class 3: General loss of body condition, a persistent cough, and tiredness after mild activity. Trouble breathing and signs of heart failure are common. For class 2 and 3 heartworm disease, heart and lung changes are usually seen on chest x-rays.

Class 4: Caval syndrome – a heavy worm burden that blood flows back to the heart is physically blocked by a large mass of worms. Caval syndrome is life-threatening and quick surgical removal of the heartworms from the pet’s heart is the only treatment option. The surgery is invasive and risky. Even with surgery, most dogs with caval syndrome die.

Not all dogs with heartworm disease develop caval syndrome. If left untreated, heartworm disease will progress and damage the dog’s heart, lungs, liver, and kidneys, eventually causing death. In essence, it is death by strangulation and complete organ failure.

The U.S. Food and Drug Administration (FDA) has approved two drugs for the treatment of heartworm disease in dogs. Both drugs contain arsenic and are effective at killing adult heartworms. Caparsolate Sodium (arsenamide sodium) is not currently manufactured or marketed in the United States. Immiticide (melarsomine hydrochloride) is given by a deep injection into the back muscles to treat dogs with stabilized class 1, 2, and 3 heartworm disease.

One drug, Advantage Multi for Dogs (imidacloprid and moxidectin), is FDA-approved to get rid of microfilariae in the bloodstream of heartworm-positive dogs.

Heartworm disease treatment can be potentially toxic to a dog’s body and can cause serious complications, such as life-threatening blood clots to the dog’s lungs. Treatment requires multiple visits to the veterinarian, bloodwork, x-rays, hospitalization, and a series of injections with Immiticide.