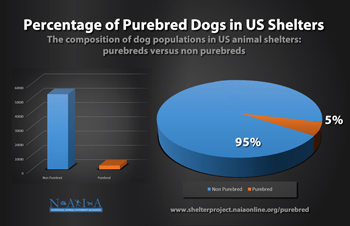 The number of dogs entering US shelters has reached an all-time low, and the number of purebred dogs found in shelters has dropped to about 5%, according to a study just released by the National Animal Interest Alliance (NAIA), an advocacy organization for responsible animal ownership. NAIA President Patti Strand said the study shows "tremendous progress" in eradicating dog overpopulation and substantially reducing the number of shelter deaths which occurred in the past due to indiscriminate or accidental breeding.

"As a result of these efforts, 83 percent of household dogs are neutered, and tens of thousands carry microchips or tattoos that help shelters return lost pets to their owners," Strand said.

“The NAIA study results are very encouraging,” said Sheila Goffe, Director of Government Relations for the American Kennel Club. “It is the most extensive survey on this subject to date and it shows that dogs identified as purebreds are rare in American shelters today, an outcome that responsible breeders, rescuers and AKC have worked decades to achieve. We are gratified that AKC programs were able to contribute to this result and we are committed to continuing these programs to further reduce the need for shelters and rescues – not just for purebreds, but for all dogs.”

The study also identified several weaknesses in the U.S. animal protection movement, including the lack of transparency among non-profit shelters and inadequate or non-existent shelter regulation and oversight.

Strand said transparency and regulatory oversight have become more important as nonprofit pet shelters have increased their share of the pet dog market. The increased demand for shelter dogs, combined with the dwindling supply from local sources, has led to unprecedented levels of dog relocation and importation. "Today's shelters include everything from traditional facilities helping local animals to new, retail-style models that meet customer demand by importing dogs from other states, offshore territories and even foreign countries," she said. "Very few people realize the scope of these rescue/shelter import programs."

According to the Centers for Disease Control, 4 Northeastern states recently received more than 30 rescue dogs and cats from Egypt for adoption in the U.S., including one dog with rabies. “Importing dogs that may be infected with rabies, other zoonotic and/or infectious diseases puts American citizens and animals at risk of illness or death and should not be allowed,” Strand says.

Connecticut veterinarian and NAIA Board member Dr. Arnold Goldman, counsels that “even though relocating pets may feel good in the short run, it is a false, potentially dangerous and ultimately ineffective practice that does nothing to solve the problem of surplus dogs at the source. Improving animal wellbeing and solving animal welfare problems such as homeless animals must be addressed at the place where animals first interact with people, by the development of targeted programs in their cities, counties and states of origin.”

National animal rights groups, including the American Society for the Prevention of Cruelty to Animals (ASPCA), are taking notice of the looming puppy dog shortage in many parts of the country. At the same time, many animal rights groups are aggressively promoting state and local laws aimed at eliminating, rather than improving American breeders. Strand said such proposals do not distinguish between the majority of responsible dog breeders and the small fraction of substandard breeders who become the focus of animal rights fundraising campaigns.

"These extreme animal rights groups have become so ideological and irrational that they would rather risk importing rabid dogs from Asia and Africa than support humane, responsible breeding in the U.S. so consumers can purchase the dog of their choice from a responsible and in many cases regulated American breeder," Strand said.

If animal rights groups are successful in driving responsible dog breeders out of business, Strand fears that nonprofit shelters will turn increasingly to sources in China, India, Egypt, Iraq and Puerto Rico, all locales that have exported rabid rescue dogs into the U.S.
To address these issues, the NAIA is seeking changes in federal and state laws to:


"Without these regulations, American consumers will have absolutely no way of knowing where their dogs came from, how they were bred and raised, and whether the shelter they've patronized is following responsible animal care practices. The pet dog market will be a virtual Wild West of unlicensed, unregulated shelters operating without rules, standards or accountability," Strand warned.