A Primer on Vomiting 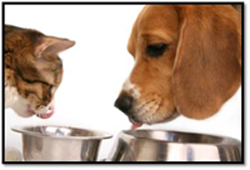 Gross title, I know, particularly for those of you not in a medical profession. It takes a strong stomach to read about vomit (and poop, for that matter), but I hope you will take a few minutes to ponder the following information. It just may prove beneficial in caring for your pet’s health.

“Normal” Versus “Abnormal” Vomiting
It’s normal for most dogs and cats to vomit once or twice a year. The cause may be a passing virus or ingestion of something that the gut deems “unagreeable”. Unexplained vomiting that occurs more than a few times a year, however, I consider to be abnormal and deserving of medical attention.

One would think that stepping out of bed barefoot into a puddle of yuck, or new white carpeting decorated with bile stains would initiate a veterinary visit. Yet many people, vets included, make the mistake of ignoring upchucking as long as the animal appears normal otherwise. They justify the vomiting with excuses such as:


Causes of Vomiting
Vomiting is a super non-specific symptom- I could list more than 100 diseases/abnormalities capable of causing dogs and cats to vomit. While it is always tempting to think something must be awry within the gastrointestinal tract (stomach and intestines) when vomiting occurs, one will frequently miss the diagnosis wearing such blinders. Abnormalities within the liver, gall bladder, kidneys, and pancreas commonly cause vomiting as a primary symptom. Vomiting can also also be associated with some hormonal imbalances and in cats, it can be a symptom of heart disease.

These days, one of the most common causes of vomiting in dogs and cats is inflammatory bowel disease (IBD) in which the lining of the stomach and/or intestines becomes infiltrated with inflammatory cells. Although the exact cause of IBD is uncertain, it is thought to represent an allergic reaction within the bowel. Left untreated in cats, IBD can morph over time into a cancerous condition called lymphoma (one good reason to address vomiting sooner rather than later).

Diagnosis and Treatment of Vomiting
The diagnosis of vomiting begins with you providing a thorough history for your veterinarian. Include details such as frequency, time of day, material found in the vomit, anything unusual that might have been ingested, normal diet, and all other symptoms observed. Next comes a thorough physical examination. This may be followed by blood and urine testing (to evaluate liver, kidneys, pancreas, etc.) and/or imaging studies such as X-rays and ultrasound. In some cases, biopsies from the gastrointestinal tract are needed to confirm a diagnosis. Biopsies can be obtained surgically or via endoscopy- a long telescope device that is nonsurgically passed into the bowel. (Those of you over the age of 50 know exactly what I’m talkin’ about!)

If such testing is not feasible, empirical therapy (treatment without a clearcut diagnosis) such as changes in diet and/or medications will be an option. Compared to 20 years ago, vets today have quite the arsenal of safe and effective antiemetics (drugs that prevent nausea and vomiting) at their fingertips. Medications to reduce stomach acid production are also commonly used when trying to resolve vomiting in dogs and cats. All such therapies should be administered only under a veterinarian’s supervision.

If your dog or cat is vomiting more than a few times a year, pick up the phone and schedule a veterinary visit to figure out the cause. As with any medical malady, the sooner the problem is addressed, the better the outcome is likely to be.

Does your dog or cat vomit more than a few times a year?