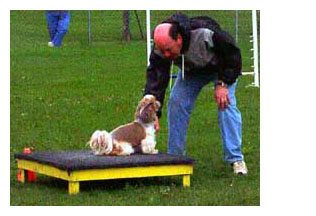 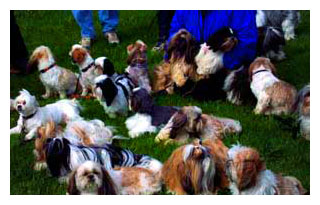 When I started Hairy D in agility classes almost five years ago, our instructor, Gerianne Darnell made the comment "you know he is a Shin Tzu" meaning I should not expect a great agility dog. Gerianne is a nationally known and respected trainer of small dogs. She currently handles Papillons and Border Collies. Pause TableI knew Hairy could do agility and I did not let her comments stop me from training a Shih Tzu.

Now, five years later, Gerianne made the comment, "I have seen a lot of good, quality performance Shih Tzu in my camps and training classes." Now that is a true compliment to our breed. No longer can the Shih Tzu be considered just a pretty dog. They are true athletes.

A prime example of how far the Shih Tzu has come in agility was this year's ASTC Agility Nationals held at Lake EImo, Minnesota. The two-day event brought together agility dogs from the East Coast, the West Coast, the South and all points in between. Even the rain and cold could not dampen the joy at running our athletes in a sport they love. There is just something special about watching a trial with only Shih Tzu competing.

We had novice dogs, dogs that had the "Tzumies," a Shih Tzu term for running wild in the ring, a dog that refused to move off the start line, super dogs that completed their titles and others that made major strides toward obtaining the coveted MACH title.

At our first ASTC Agility Nationals in St. Louis in 2002, the dogs ran in the heat. 2003 Agility HerdThis year the dogs ran in the cold and rain. Competitors were looking for the snow that just had to be mixed in with all that rain. Judge Carol Smorch was willing to hold up the trial waiting for the rain to subside. When we voted to continue, Carol was amazed that our fufu dogs were willing to run in those circumstances. Next year in San Francisco, will it be fog? No matter, the dogs will be there and love it.

Our judge for Monday was Carol Smorch and on Tuesday the judge was Jacqueline Hoye. Phyllis Celmer was Trial Chair-man, Elizabeth Scorzelli was Trial Secretary. Beth Barren was in charge of Awards and Michael Shea-Zackin was Equipment Chairman. Chief Ring Steward was Barbara Hadden. This committee was supported by volunteers that included Betty Meidlinger's husband Ken. The tents the volunteers set up were welcome during the rain! There was a total of 25 Shih Tzu en- tered in the Standard class and 27 in the Jumpers with Weaves Class. Tien Tran was the official photographer.

A high light of the photography was taking a group photo of all the dogs with the judge. You had to be there to appreciate the effort it takes to get all 20 some Shih Tzu sitting at the same time.

Next year the trials will be held in the park across the street from the hotel. If you have not had the opportunity to see Shih Tzu in action, this will be your chance. Come on over and watch and join in the fun. The Shih Tzu always seem to run faster and cleaner when they have an audience cheering them on!