The Illustrated Guide To The Shih Tzu Standard | History 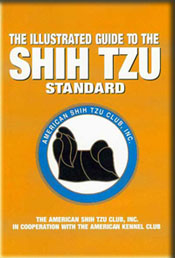 The legend of the Shih Tzu has come to us from the documents, painting, and objects d'art dating from A.D. 624. During the Tang Dynasty, K'iu T'ai, King of Viqur, gave the Chinese court a pair of the dogs, said to have come from the Fu Lin (assumed to be the Byzantine Empire). Mention of the dogs was again made in A.D. 990-994 when people of the Ho Chou sent dogs as tribute.

Another theory of the introduction to China was recorded in the mid-seventeenth century when dogs were bought from the Tibet to the Chinese court. These dogs were bred in the Forbidden City of Beijing. Many pictures were kept in the "Imperial Dog Book". The smallest of these dogs resembled a lion, as represented in Oriental art. In Buddhist belief, there is an association between the lion and their deity. Shih Tzu means lion. The dogs for court breeding were selected with great care. From these, the Shih Tzu known today developed. They were often called "the chrysanthemum-faced dog" because the hair grows about the face in all directions.

These dogs were small, intelligent, and extremely docile. it is known that the breeding of the Shih Tzu was delegated to certain court eunuchs who vied with each other to produce specimens that would take the Emperor's fancy. Those that were selected had their pictures painted on hangings or tapestries, and the eunuchs who were responsible for the dogs were given gifts by the Emperor.

It is known that the Shih Tzu was a house pet during most of the qing(Manchu) Dynasty and the breed was highly favored by the royal family. At the time of the Communist Revolution, a large number of dogs were destroyed and the breed became extinct in China.

Around 1930, Lady Brownrigg, an Englishwoman living in China, was fortunate to find a few of these dogs, which she imported to England. These, with a few salvaged by diplomats stationed in China, made up the stock which was responsible for the continuation of the breed in Europe.

From England and the Scandinavia Shih Tzu were sent to other countries in Europe and to Australia. During World War II, members of the Armed Forces stationed in England became acquainted with the breed and on their return bought some back to the United States, thus introducing them to this country.

The Shih Tzu was admitted to registration in the American Kennel Club Stud Book in March 1969 and to regular show classification in the Toy Group at AKC shows September 1, 1969.